[Note: It has been pointed out to me, quite appropriately, that without context for the connotative values of truth and reality that I am inferring, the article makes less sense. For context I am using ‘truth’ as the absolute and reality as the perspective bias form the individual.]

Plato, perspective, truth, reality… tribes? Learning, knowing, understanding are all limited to various degrees by how we see that which surrounds us; and similarly we are affected by how people and surroundings influence us. Believing that our reality is ‘truth’ seems more an arrogance of self than a stronger more reliable view of that which is, which remains hidden to various degrees by the shadows of our own view… which humans too often perceive as truth.

Plato (424/423 BC – 348/347 BC) learned to explore under the tutelage of Socrates. Along with Aristotle who developed what might be called a more mechanistic view of the world and human consciousness. Plato explored the subtlety of the meandering mind. Almost as if he saw different groups of perspectives like clouds that change shape with the wind, or ‘look’ different depending on where you stood.

…for he is good who has a good soul. But the cunning and suspicious nature of which we spoke, he who has committed many crimes, and fancies himself to be a master in wickedness, when he is amongst his fellows, is wonderful in the precautions which he takes, because he judges of them by himself: but when he gets into the company of men of virtue, who have the experience of age, he appears to be a fool again, owing to his unreasonable suspicions; he cannot recognize an honest man, because he has no pattern of honesty in himself; at the same time, as the bad are more numerous that the good, and he meets with them oftner, he thinks himself, and is by others thought to be, rather wise than foolish.

Sub-culturalism may have been thought by Plato as a cinema screen upon which shadows are displayed. His insightful examination of bias and perspective gives one a reasonable context to understand how group-think works. It also illustrates that when one is out of ones element, it’s a whole new ball game.

In our current reality, the dynamics remain the same. The playing field is larger and there are infinitely more creative ways to institute group-think in a sub-culture. Between the dawn of the radio and television age, to the broad savanna of the internet, cultural perspectives have entirely new mechanisms by which to foment and project status, or attachment to a particular group.

Still today, wandering outside of the group (tribe) into other forums increases risk to the established status of the individual. Once outside the group where status is recognized, one realizes that one is no longer recognized for status. If the status did not reach across cultural boundaries, suddenly the individual is in a new world.

Beliefs are the center of sub-cultural reality.

These shared beliefs create the general boundaries for a group. Take a republican and send him to a gathering of democrats and the republican might find that his ideals are not so well accepted as they are in his own group. Either way, humans still tend to tribe-up, so to speak.

In the evolution of consciousness, or awareness of these realities, what would it take for humankind to begin to recognize that too heavy a reliance on group-think actually diminishes ones capacity to expand and learn, to become wiser? We are globally interdependent upon the support systems of the commons of earth. We are also stressing these systems.

Cognition seems to be the pivot upon which a mind can change. As Oliver Wendell Holmes once said, “A mind stretched by an original idea can never return to its original form”. The question then becomes; what does it take to stretch the mind so that the original idea becomes part of the cognitive awareness of the individual?

Pandora’s Box has always been open in the minds of humankind, and along with mischief and mayhem come hope and potential. But all of this is a paradox. We are capable of greatness and evil, and through our sub-cultural beliefs we follow pre-ordained paths that can limit our view and evolution. One may also argue Pandora’s Box is merely the chaos of our kind; and in that, it is the impetus and impediment that is boon or bane to our human potential. But does not understanding rely upon knowledge and perspective?

How human experience and cognition filters through its array of perspective beliefs, to find it’s own reality, in its own subculture, in ones own context, is a process of path. But as Plato would likely say, It’s still just another shadow on the wall. 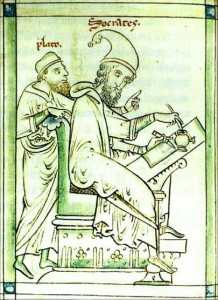 The more important question may be: what will it take for the mind of humankind, individuals and groups to go beyond the safe harbor of the convenience of ones own cultural trappings and perspective, to explore and evolve socially, as individuals in (a) larger group(s), to recognize the larger truths hidden or masked by our realities?

For it seems that wisdom of such a nature would be the fertile ground of virtue that could elevate the individual within the reality of our commons, to realize that a group of individuals can be stronger than a person in a group. And a person still may be weaker than an individual, for the person often wears the mask of the group and it’s perspective. It seems that without such cognition built upon the foundation of reason on the pedestal of the individual, we may not evolve as one would like.

In our global commons, how do we separate the wicked and the foolish from the honest and wise? That we may, as a global community, make decisions that support our mutual needs and goals of achieving greater potential for life, liberty and the pursuit of happiness? To become strong, or stronger individuals in the human tribe, to be a part of and yet stand upon the strength of our own power to be; and to contribute to the commons and profit from mutual exchange to our benefit? This is the question we face as a human society. For upon this potential and our ability to achieve it, lies our future.

This site uses Akismet to reduce spam. Learn how your comment data is processed.