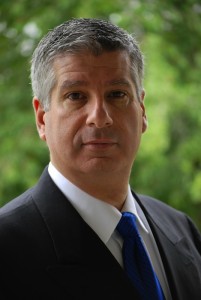 I’m a generalist by nature and inclination. My views are systems based, which allows for a widely scoped field of consideration. Thus far, I have found that, general systems theory, system-dynamics, and Living Systems Theory concepts and constructs include some of the best guides to understand our selves, our world, and our universe from an analytic point of view. Understanding systems science and system dynamics gives us a simple way to understand how physical and social systems share common ground in function and form.

I like to examine overarching interactions between groups and systems to understand the relative health of system interactions in order to see if adjustments can be made to improve overall function in consideration of relevant factors. This can apply to any system. Governmental, economic, business organization, social psychology, environment, etc. By examining the health of interactions in context, one can better gauge what actions may be needed to achieve a desired outcome.

Early 1970’s – My study interests included oceanography, geology and anthropology, but my focus was geopolitics and cultural dynamics. The interconnection between belief systems (socio-cultural) and resource issues. How to balance resource capacity with resource needs? Why we go to war and what are the underlying reasons at a given time? What drives individual and group behavior?  Even as a youngster I was busy with understanding motive and manifestation in behavior. This, I later realized, was based on my interaction with chaotic family dynamics.

Mid  to late 70’s – It was around the mid 70’s when I told my parents, based on my current understanding, we should not be worrying about Russia attacking America as they did not have a religiously driven government; we should be concerned with what may come from the Middle East due to the combined dynamics of governance entwined with religion. I recall pointing out that Russia and China were not religious and therefore had a different prioritization basis. I began to devour geopolitics, engineering and natural science. Spending my lunch hour in the library reading the latest magazines: US News & World Report, Newsweek, Time, Popular Science, Popular Mechanics, Nature, were some of my favorites. It was around this time the chaotic nature of the family led me to escapism and a brief interlude in the local counter-culture around the 8th – 10th grade. I graduated early from high school and began attending a local college. From there I decided to go to engineering school.

Late 70’s early 80’s – Engineering and production, as well as electronics. I graduated from Sound Master Recording & Engineering Schools in 1981 (the same year I would have graduated high school had I stayed). Working on various productions in Hollywood until 1983 when I moved to the NATO base in Iceland. Working at the AFRTS station at NAVSTAKEF military base (a NATO base in the Atlantic). A typical day included field and studio camera work, editing, a live evening newscast and nightly radio broadcasting. I also worked at the youth center.

1980’s – My interests turned more deeply into psychology and behavioral science. I wanted to understand  how we arrive at what we ‘think’ we know. I examined the perspectives of Adler, Freud, Maslow, and Jung, as well as Family Systems (Dr. Murray Bowen), sub-cultural beliefs, and abnormal psychology. I began to look at neural function in the brain, neuro-chemistry, interaction, nutrition, neuro-development. I hypothesized that ‘the individual’ meta-self (social-psychological/physiological), is a construct of 5 inter-dynamic influences: genetic, nutritional, biological, toxic-infectious, and social-environmental.

1985 – I started my own record company and began developing artists. All in all, I worked on more than 1,000 productions and shows over the years. I had been a radio announcer, co-written and published new songs, done hundreds of shows and concerts, worked in television and film, and even managed a well known surf band called ‘The Surfaris‘, whose hit song ‘Wipe Out’ was renowned.

Mid to late 80’s – I began working at the University of the World with Dr. James Grier Miller (Living Systems Theory) and Dr. Martin Chamberlain (Chancellor Emeritus, UCSD). The UW board of directors included Lord Walter Parry, Baron of Walton. There I developed the TLC/PATH system to systemically increase effective education. This led my to working with Dr. Louise Schmidt and Aurelia, the daughter of Françoise Gilot, which led to working with Kathleen Murray and Dr. Jonas Salk at the Salk Institute in La Jolla.

Late 80’s to mid 90’s – Jonas encouraged, and assisted, me with the TLC/PATH development and tried to help me understand why politicians did not do what is best. Aurelia helped develop an architectural model to show how the physical structure could accent function. Kathleen helped me with her editing skills. My paper was presented at the EDUCOM (Inter-University Network) meeting in 1992 where I presented to professors from many prestigious universities generating much interest in the project. It was during this period that I began to formulate the idea of a Centrist Party to help break the ‘increasing’ gridlock between the left and the right. I began to realize that special interest influence was eroding governmental capacity and preventing important work from getting done.

‘During this period I was splitting my week between managing a recording studio in Hollywood (Friday afternoon to Sunday) and 4 days a week (Monday – Thursday) at the University in La Jolla. It was also around this time that I met Justin Lancaster, who worked with Roger Revelle. I was aware of climate issues, though not in depth; I had only begun to recognize that the seeds of this issue could grow to encompass major significance in the bigger picture.

In June 1995, around June 20th or 21st, Jonas Salk invited me to come down to the office on the next Tuesday. Jonas told me he was going to recommend me for what he called the genius grant (The MacArthur genius award), and said he was on the board of directors. He died that weekend before our intended meeting. I lost a dear friend, one of whom I could say knew my mind. Though I had not known it just one week prior, I lost an important advocate for my educational system development work.

Mid to late 90’s – I produced a modern surf music album which actually charted some songs in a few countries. Worked a bit in radio and television again and did some business consulting. I continued to dabble with my TLC/PATH system and worked to improve methodology. I also began examining related information technology that would benefit the system.

In the mean time, I had invented a new time management system for aviation and written my own patent, filed in 1998 and awarded in 2000; I also was able to secure the international patent.

Late 90’s – I began to think about the climate issue again and was particularly interested in some of the information that was being discussed at that time regarding an identifiable change in the temperature path that seemed to lend strong credibility that changes in atmospheric concentrations of greenhouse gases may have altered the climate path. I moved to Detroit, Michigan to try to further my TLC/PATH work through funding that had been made available by the Reagan Administration for the ‘Safe and Drug Free Schools’ initiative.

1999 – Watching America split down the middle in the 2000 election confirmed for me that a Centrist Party was sorely needed.

2000/2001 – I concentrated on my aviation timer, which I now call Flight Watch, hoping that if it went into production I could fund my educational system development work. Still working on the TLC/PATH I went to Texas to meet with Dr. Bruce Perry of childtrauma.org and an Adjunct Professor of Psychiatry and Behavioral Sciences at the Feinberg School of Medicine of Northwestern University in Chicago who had done some profound work in understanding neurological development and psychology.

9/11 – I had just landed on September 10th coming in from Hong Kong.  I got up before 6am and turned on the television to watch the market open. The first thing I saw was the image of the twin towers, and one had a hole in the side with smoke coming out. They said that a small plane may have hit the building. I knew a small plane would have a hard time making a dent in the building though. I was on the phone with a friend when the second aircraft struck the adjacent tower, my first words were: “We just went to war”.

As soon as aircraft were flying again I flew to New York to lend my support. The fires were still burning. New York was pulling itself together and I watched the Macy’s Thanksgiving Day parade. I went to work for Homeland Security hoping to help and try to make a difference. I did what I could and helped get the TSA started. But heading into 2003 I began studying climate again. I was beginning to sense that we had a ‘very’ serious problem here, and the politicians were not paying proper attention to the matter due to public (and policy-maker) misunderstanding.

2003 – I started a new company with my partner that focused on web system development, information system architecture, and media design, which later expanded into content management systems. I had been working with computers since the first Apple and saw information technology, properly utilized as a way to increase efficiency and security for organizations and of course this suited my TLC/PATH focus as well.

2004 – I was in the Vallais in Switzerland contemplating the political landscape and realized the time was past due for America to have a sensible third party. Rather than wait to rebuild a network I began to research and analyze issues in order to formulate the most sensible platform. I had been thinking about this since my discussions with Jonas Salk in the early 90’s, so at this time I began congealing thoughts and discussions and started writing it all down. I continued studying climate and working to understand impact potentials. In attempting to understand why people don’t choose rational interpretation based on logic and prefer the comfort of group-think I began examining the Dunning/Kruger effect and Stanly Milgrams’ work regarding Obedience to Authority. That led eventually to Christopher Chabris’ work in neuropsychology.

2006 – on July 4th, I sent out emails to US newspapers and opened the web site for The Centrist Party. According to polls in 2006, 70% of America felt we needed a more reasonable solution to the political stagnation if we were to begin to make meaningful progress. I already knew at this time that the key issue was climate, and that our energy infrastructure, economic health, and every other key issue were related to this critical issue.

2008 – I started a new project called The OSS Foundation to collect my thoughts on various projects and issues and to support climate science communications. OSS stands for many things, Open Systems Science, Open Source Solutions. Dr. Miller, who I had worked with previously, used to work for the Office of Strategic Services in WWII, so I enjoyed the small irony. To me it means many things, All observable systems are Open. The S’s stand for Source, Systems, Science, Security, Solutions and anything Sensible.

2011 – Author of Exposing the Climate Hoax: It’s ALL about the economy. This book explores the interconnections between economics, energy, environment, security, and even the psychology involved in why people ‘believe’ in a view rather than rely upon evidence as observed and tested.

Awarded the ‘Distinguished Communications Award’ (by The National Academies of Science) 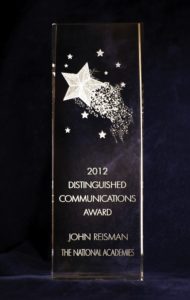 This was the first effort by the NAS to do better climate communications. Directed by myself, the film, along with other communications I contributed to at the NAS, was acclaimed as the best science communication they had put out to date.

One reply on “Bio”